I was not a little fellow. According to a mermaid’s notation, I was already nearing a hundred years old.

Mermaids needed to reach at least 100 years old to be able to grow into the form of a human child who was 10 years old, particularly in the aspect of wisdom. Perhaps due to having lived in the ocean water for so long, many of our clanspeople were a bit slow.

Thinking up until here, I started to become sad again. The mermaid clan was slaughtered. Mother had gotten heavily injured and had taken me to hide everywhere. She struggled on whilst at death’s door for several years and in the end, she didn’t manage to pull through.

I became the very last merman in this world.

“What are you crying for?” The little gentleman asked.

I hurriedly turned my back to him and covered my eyes, mouthing to myself softly, “I can’t cry, I can’t cry…”

Unable to help myself, tears trickled down my face continuously like beads from a snapped thread. They looked like pearls but they weren’t.

I carefully turned my gaze to him, attempting to see through his thoughts.

But to no avail. His cultivation realm was too high. His heart was as calm as a boulder. When Su Zezhou saved me, I managed to hear the words in his heart due to his mood fluctuating rapidly. Otherwise, I simply wouldn’t have learnt of it.

Once I stopped crying, the little gentleman asked me, “Who sent you?”

Before I could answer, he furrowed his brows and muttered to himself, “There’s been a lot of beasts starting a rebellion in the mysterious area as of late so it’s been very dangerous. Why would a little kid who doesn’t know any cultivation techniques run here? Is he looking for death?”

I responded, “I was thrown down here by someone.”

Seeing the little gentleman look at me, I spoke a little louder, “Qing Xu Sect‘s Lu Yan and his little lackey Lin Yunpu, kicked me down the flying boat.”

“Qing Xu Sect?” The little gentleman laughed and asked, “Why would they take a little kid with them?”

The little gentleman had an evil-looking face but looked really good when he smiled. I haven’t talked to anyone in so long so I started narrating the whole sequence of events for him to hear.

When I mentioned Immortal Su Zezhou, my face was one of admiration.

Once the little gentleman finished listening, he looked at me with a smile that was not like a smile. I felt a bit scared being stared at by him and took the initiative to ask, “Who are you? Where is this place?”

The little gentleman looked around and his gaze became alarmed. Using rich words to describe the terrifying legend of the mysterion area, he deliberately lowered his voice and occasionally imitated the calls of some monsters.

After the laborious exchange of words, mist started to rise in the forest. I was only able to see the nearest tree and any farther than that was a blurry view. The tree leaves rustled, making the surroundings much more gloomy and frightening.

It frightened me into my eyes growing wide

He prepared to leave and I blindly followed suit. It was hard to pass through the shrubberies that were as tall as half a person and I frequently stumbled over the branches.

Xie Lin came to a stop and turned his head, saying, “Stop following me.”

The mist grew thicker and I couldn’t see his expression. Worried that he would leave me behind, I anxiously asked him to take me with him.

I mustered my courage and lied, “I am Immortal Su Zezhou’s child bride. After I grow up, I am going to tie the knot with him and become his partner. If you help me, he will repay you.”

Xie Lin’s laughter travelled through the mist, sounding clear and bright, extremely pleasant to the ear.

I felt like he was ridiculing me and feeling embarrassed, my cheeks turned thoroughly red.

After a while, the mist dissipated.

Xie Lin casually sat down, leaning on the massive stalk of a plant. He crossed his legs and lifted his chin at me, asking me to go over.

I walked towards him.

Xie Lin said, “Your future husband injured me before. When I was recuperating, you crashed onto me. Let’s settle this account.”

Immortal Su Zezhou had fought with him. My heart dropped down with a clunk and I asked a very foolish question, “Are you a bad person?”

He could even eat humans!

My legs started to quiver as I slowly tried to retreat. Taking the chance while he wasn’t paying attention, I turned around and ran.

Xie Lin shouted behind me, “Little fellow, what are you running for?”

I blocked my ears and ran for my life, pulling at least several meters in distance.

The branches continuously hit my body, the thistles and thorns ripping my clothes, leaving scratches on my face, arms and legs, covering it with bloody scars.

Feeling my legs lose strength, I leaned against a big tree and panted for breath, looking behind with trepidation.

Fortunately, he hadn’t caught up.

I rested for a while and turned my head, wanting to look for the road ahead when my line of sight coincidentally came across a tiger.

It was standing very close to me, opening its big mouth and revealing its bright red tongue. It panted for breath very rapidly, the pungent smell from its mouth rushing over.

The tiger took one step forward.

Struck dumbfounded, I actually didn’t know how to flee.

Just when I thought I was about to lose my life, I heard Xie Lin’s voice ring, “Qiong Qi, come here.”

In that instant, the threat disappeared.

Xie Lin said, “With those short little legs of yours, where could you run off to?”

I was convinced that I couldn’t escape his evil clutches so I sat down on the ground in despair.

Xie Lin confidently walked up to me and with each step he took, Qiong Qi also took a step, appearing extremely devoted.

It was only an odd tiger. Its figure was massive and its body was covered with fur like a hedgehog. So this was the terrifying beast of the ancient times, Qiong Qi1 Picture of Qiong Qi: 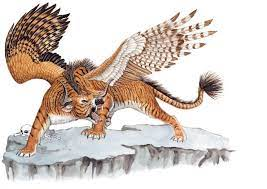 My mind began to wander.

Xie Lin carried me up from the ground and examined me up and down.

I was so scared I started shivering. I wanted to beg for mercy knowing that this evil tyrant wouldn’t let go of me so easily. In my desperation, I recalled seeing a folk story and blurted out, “To kill or to cut off my flesh, do whatever you want!”

I yelled out so loudly that my throat hacked and my voice cracked, sounding piercing to the ears.

Xie Lin nodded his head in praise, “How brave. Then I’ll kill you first then I’ll cut your flesh.”

With tears in my eyes, I glared hatefully at Xie Lin.

Xie Lin waved his hand and the pain I felt in my body suddenly disappeared without a trace.

Stunned, I rubbed my face strongly and realized that it didn’t hurt. When I rolled my sleeves up for a look, I found no marks on my fair and tender arm.

The injuries caused by the thistles and thorns a while ago had completely vanished.

I assumed that he had grown compassionate and was going to spare my life so my hateful eyes immediately turned to ones of gratitude.

“What are you looking at?” Xie Lin raised a brow and calmly said, “Treat this as the evil tyrant’s palliative care.”

It was nothing more than falling from the immortal realm to hell.

As his voice fell. Xie Lin snapped his fingers. Qiong Qi heard this and moved, approaching me. Then he held my neck and threw me up and down, asking for praise from its owner.

I could feel its saliva dripping down my back and also smelled the scent, thinking it was extremely unpleasant.

I didn’t dare move recklessly, fearing that a struggle might incite the Qiong Qi to open its mouth and swallow me whole.

But its saliva was too pungent, making me want to puke.

I stared teary-eyed at Xie Lin, saying, “I’m really dirty. Can you not eat me?”

Xie Lin was much easier to talk to this time and nodded to give his consent.

I had just wanted to tell him to ask his Qiong Qi to let me down but I hadn’t opened my mouth when the evil tyrant said.

“I’ll take you back to the demon world as a hostage.”

Support "I Fell in Love with My White Moonlight's Arch-Enemy"

Status: Dying From Work.
Fluent in Chinese, English and Procrastination.
If you like my work, please consider buying me coffee, giving this a like or leaving a comment. You can read ahead by becoming my patron or sponsor a chapter by buying me coffee~