This street was a bit peculiar. There was no wall in sight, only darkness a few meters away, and the stalls were set up just before the darkness.

Although there were stalls on both sides, the sellers were hidden in the dark, only revealing a blurry part. The street was also very quiet, with no footsteps being heard.

The ghost market was indeed worthy of the name, appearing very ghostly at a glance.

Upon walking closer to a stall where there were buyers in front, Ning Meng was able to hear faint voices, their voices asking prices were not too loud.

The stalls in front also had similarly quiet transactions from beginning to end. She saw a shadow approaching a stall and exchanged an object for the exact same object. There was no sound made in the process, and the seller didn’t even reveal his face.

There were all sorts of weird things in the stall, as well as people who pointed to the air to ask for the price, but she could only see black air. How ominous. She didn’t even know what use those things could provide.

Ironically, it was humans who thought of making deals with ghosts.

Not knowing what Shi Shanjin wanted, it was certainly a problem that Shi Qi’s eyes were only half-opened. Everything he saw was currently a blur, which affected his present life.

After passing through the quiet and strange stalls, Ning Meng finally saw a distinctive stall.

The stall was in front of them on the left, and there were many shadows standing in front of the stall, appearing as though things were selling well.

Once she had walked closer to it, Ning Meng realized that the man sold dried flowers, the kind that could be usually picked in the field, and they were spread out on the ground in bunches, and were quite a lot too.

The buyers didn’t speak, only throwing money and grabbing his share before leaving. However, the seller smiled and kept talking. She couldn’t hear him clearly, but it sounded as though he was saying that he was going to be rich.

Seeing her look over, Shi Shanjin whispered: “I’m afraid this person came in on a fluke If he’s able to get out safely without any problems, he must have a lot of luck.”

Ning Meng was flabbergasted. She assumed that all things were sold like this here.

Shi Shanjin’s face remained calm, “Every month, there are ordinary people who mistakenly stray into the ghost market. Those who can pass through have a sturdy life and those who can’t lack life.

In fact, it was useless to warn them.

There were more than one or two people who would get lost in the ghost market, and he had seen plenty of them before. In the end, ghosts would end up possessing them and they would become a walking corpse.

Shi Qi was walking in between them the whole time, behaving and not talking, but just listening, his eyes kept flickering on the stalls on both sides.

He was able to see some things, but everything was still vague.

The current situation made him long for the time when his eyes could still see everything clearly.

After walking for a long time and not seeing the end of the street, Ning Meng couldn’t help but ask, “Where is the thing you mentioned?”

Shi Shanjin pointed forward, “In the corner over there, the news I obtained says that there’s a possibility that it might come, otherwise, would have come here for nothing!”

Shi Qi’s face looked inevitably disappointed when he heard what he said. But none of the two had noticed it due to the darkness.

The system reminded: “Don’t ask anymore. You shouldn’t talk so much in this place. You are more special than Shi Qi right now. If you are not careful, your soul might leave your body and that would be bad.”

Although they could guarantee that her soul wouldn’t be in danger outside, this place was special, so there was a possibility that a special circumstance would occur here.

After being scolded by the system, Ning Meng no longer asked any more questions.

After walking for a long time, they had finally arrived at the place that Shi Shanjin had pointed to.

This place ought to be the end of the market because the other side looked so dark, it was impossible to see anything. Many shadows walked inside, some carrying the flowers she had just seen in a stall before.

She couldn’t see anything in the corner, even if she squinted her eyes.

However, on the ground in front of her, she could see a piece of cloth spread out. There were more than a dozen things in all kinds of strange shapes, all of them filled with different varieties of qi.

Or at least the colors of Qi she could see were in a variety..

Among the items laid out on the cloth, she was able to recognize a few. There was one that was similar to the crow that Shi Shanjin had before, the only exception being that the black air was much more intense and was full of dead qi.

There was also a more special jade that has a circular hollow shape. It was surrounded with red light and black air. The two were entangled together, making people unable to shift their eyes away.

She didn’t quite understand what the rest of the items were.

But after a while, a lot of people started gathering.

When Ning Meng went to watch them secretly, she saw that several of them drooled, their eyes affixed on it appearing as though they were about to pounce on it..

Seeing her gaze also fixed on it, the system took the initiative to explain to her: “That’s a special kind of cicada. Generally, noble tomb owners will have jade in their mouths when they are buried. This jade is usually carved into the shape of a cicada. Over time, qi will be built up inside. This cicada is much better than ordinary ones.”

She was quite interested in it at first, but once she heard this explanation, Ning Meng lost all interest in an instant and moved her eyes away. No matter how beautiful it was, the moment she recalled that it had been stored in a dead person’s mouth for hundreds of thousands of years, she felt uncomfortable.

On the other hand, Shi Shanjin was calm as he pointed his finger to the ground. Before anyone could see where he pointed to, he had already retracted his hand.

He didn’t ask the price, but instead, took out a jade scepter1 , which was brimming with brilliance, from his chest, and it instantly attracted the attention of people around him.

Ning Meng also thought it looked good, especially since she could see the qi wrapped around this jade scepter. Three faint colors appeared on it, making it look even more special than the cicada she had seen just now.

She shifted her gaze to the darkness in the corner.

After a few seconds, half an arm stretched out from within, looking like a corpse. Its skin was so withered, it looked as though it would break in a snap and its fingernails were also quite long.

No matter which angle one looked at, it looked very strange.

Then she saw the hand stretch out its index finger and middle finger and shook it.

Ning Meng could guess that the deal might not have worked out, and felt it a little unbelievable. The cicadas displayed in this place looked a lot worse than the jade scepter, and only a multiple number of items would be able to match up to the jade scepter’s price.

Upon seeing the master shake his hand, the bystanding figures also sucked in a breath. Ning Meng guessed that they were human beings, because ghosts would not be able to breathe in.

Seeing this gesture, Shi Shanjin knew that the price he gave did not match up. His offer was still a bit ordinary, so he stored the jade scepter back into his chest and took out another similar object.

This time, the surrounding figures all made small noises.

They crowded into a ball, looking for a place to get closer, all wanting to see what he was holding.

Ning Meng also went to take a look and found that it was a piece of Round Dragon Jade.2 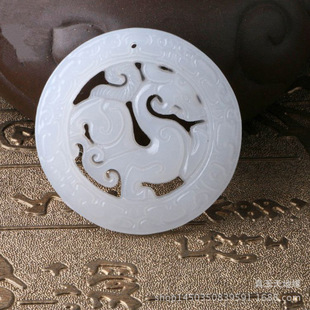 It was called a Round Dragon Jade because she saw that body and the tail were coiled, forming nine circles. Even if it wasn’t clear, one could still see that the curved sculpture looked lifelike.

Anyone who studied history knew that the number nine was very noble in the ancient royal family, and the dragon indeed referred to the emperor.

Even the system couldn’t help but say: “This is too great of an item…”

Ning Meng seized the opportunity to ask it why.

Ning Meng squinted her eyes to look at it and was really surprised. The nine circles she had seen earlier now had only eight circles. She closed her eyes and opened them again just to see nine circles again.

It was no wonder the shadows around here exclaimed so exaggeratedly. It turns out that this piece of jade was really mysterious.

Shi Shanjin handed the jade over and the withered hand accepted it.

After waiting for a while, the withered hand finally handed out something, but it was the size of a fingernail. Placed on the palm of the hand, one couldn’t see any brilliance shining from it.

Ning Meng couldn’t see what it was.

Shi Shanjin took it, put it away, and signaled to her that they could leave.

Ning Meng hurriedly pulled Shi Qi to follow him, and just as they left, she turned around to see the stall being surrounded by shadows, surmising that everyone was probably exchanging things.

However, it was good that they had managed to get an exchange and at least, nothing had happened.

The three people coming from different generations, continued to walk forward with lithe footsteps but stopped at a booth in front.

Noob dev by day, Potato by night. You can find all my work on the site by clicking on my name~
I like reading all kinds of genres including, BL, BG, Horror and Smut.
If you like my work, please consider buying me coffee, becoming my patron or leaving me a like or comment! For the latest updates, join our discord
Advanced chapters are released twice a week on Patreon for every novel~