It’s not that she wanted to stay there, but it’s because Empress Dowager Song hadn’t seen her for so long and really missed her, so she kept talking.

Because of their conversation, Song Jinning learned that Empress Dowager Song had a daughter called Li Xiyan, titled Princess Jingle. Because Li Xiyan caught a cold, she couldn’t attend the wedding and had to rest.

Song Jinning vaguely remembered that there was such a princess in the book. In the book, Princess Jingle was weak and had a quiet temperament. But she was rarely mentioned so Song Jinning didn’t know much about her.

However, another princess titled Huaiqing, had quite a bit of an impression.

Because Princess Huaiqing is the older sister of the heroine in the book. Not only does she focus on making trouble with the heroine every day, she also dared to humiliate her in-laws, which is very bold.

Compared to Princess Jingle, Song Jinning was more intrigued by this Princess Huaiqing.

“Your Highness, didn’t you remember what the Prince said to you before you left Yunnan? You are now the Empress, you must not be lazy and you should always sit straight. How come you’re not even following the prince?”

Song Jinning didn’t listen to her.

With her right hand propped on her chin, she looked at Bai Lu with a smile.

“Lu’er, how did I behave with the Empress Dowager just now?”

“The empress was gentle and had a very good temperament.” Bai Lu stood aside with her hands down as she replied sternly.

Gu Yu gritted her teeth in secret, and she gave Bai Lu a death stare at the same time.

Gu Yu had a round face. Although she is two years older than Song Jinning, her cheeks had baby fat which made her look younger than she actually is.

Especially when she was angry, her cheeks bulged which reminded Song Jinning of a hamster that she really wants to squeeze.

Song Jinning resisted this impulse. The main reason is that she is too lazy to move right now.

But she still had enough energy to move her mouth.

“When facing someone else, I naturally have to take care of my image. But you two are not someone else, so I can show my true self.”

Gu Yu was completely taken away by Song Jinning’s words. With joy, she walked over to Song Jinning to pour tea and give pastries.

Bai Lu glanced at Gu Yu and thought to herself, how can you be so dumb? Don’t you realize you are being completely played by the Empress.

However, in view of Gu Yu’s temperament, Bai Lu wisely chose to turn her head and stay silent.

Song Jinning has been continuously tired for the past few days. From Yunnan to the Wedding, she has always been tired so after leaning for a while on the bed, she fell asleep.

Even if she clearly heard the sound of footsteps, she still didn’t lift her eyelids.

Gu Yu and Bai Lu are both trained in martial arts. With the two of them there, she felt safe.

Suddenly something jumped on Song Jinning’s stomach, and at the same time she heard a meow in her ears.

Song Jinning knew that this was her cat without opening her eyes.

She started to raise this cat around a year ago. His fur is as white as snow, and his eyes are as blue as the sea. She liked it very much, so she named it Xueqiu. However, it is usually called by the nickname ‘Qiu Qiu’.

She closed her eyes and grabbed Qiu Qiu before continuing to sleep.

The weather changes a lot during spring. When Song Jinning came back from Shoukang Palace, the sun still shone brightly but at dusk, it suddenly started raining.

Song Jinning stood under the corridor with her hands folded, watching the rain.

The rain is not heavy, and the wind coming with the rain is not cold. However, the darkening sky and the sound of rain can easily make someone feel gloomy.

After a while, Song Jinning turned her head and looked at Bai Lu standing beside her, with her eyebrows raised slightly.

“It seems that we will be staying in this gloomy palace for a long time.”

Was the Empress sentimental?

But now that she married into the royal family, how can she still be the same as before?

Bai Lu couldn’t help but feel a little sad. While she was thinking about what to say to console Song Jinning, she heard Gu Yu’s crisp voice.

“Your Highness, dinner is here. Come inside now.”

The next moment Bai Lu felt someone run in front of her, and it was Song Jinning who turned to go back to the hall.

“What is the food? Is there the xiangchun1香椿 (xiāng chūn)- Chinese toon sprouts. Below is how the Xiangchun eggs would have looked like: 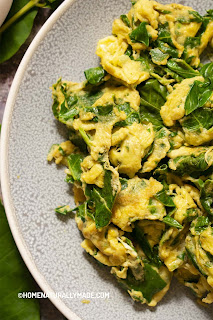 Then there was a sigh of satisfaction. Song Jinning’s sighing voice was heard: “I’ve been counting the days since i have last eaten xiangchun. These xiangchun eggs are really fragrant and tender.”

Why did she think Song Jinning was sentimental just now?

She is clearly a foodie who only has food in her eyes!

Since Song Jinning ate xiangchun that she missed so much, she slept well that night.

When she woke up the next morning, although the sky hadn’t cleared yet, it wasn’t raining anymore.

Seeing Song Jinning, the Empress Dowager waved and told her to sit down on the table.

“Aijia has been busy with government affairs for the past few years. Now that aijia is idle, aijia actually slacked off and couldn’t get up this morning.”

“What is aunt talking about? I won’t lie to my aunt, when I came back from Shoukang Palace yesterday, I fell asleep immediately.”

Gu Yu knew, and she hurriedly opened the food box held by the maidservant behind her, and took out the two plates of pastries in it.

“This is a new snack made by my kitchen this morning. It tasted good, so I brought some for Aunt to try. I don’t know if it will suit aunt’s taste however.”

Empress Dowager Song took a look. It was a round, dark brown-green flat pastry with a delicate scent.

“This is called Haozibaba2蒿子粑粑 (Hāozi bābā)- There is no direct translation. But here is how Haozibaba looks like: 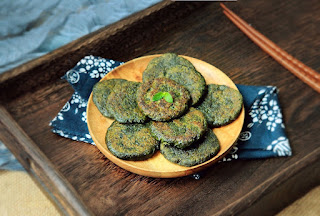 , it is a snack that comes from the Jiangnan area. The ingredients used are glutinous rice flour, bamboo shoots, preserved meat, and pickled vegetables. But the most important of these ingredients is the wild herb called wormwood.”

She is the Empress Dowager, how dare you serve her a dish made of wild herbs? Are you crazy?

But who is Song Jinning? This is her niece. It is no exaggeration to say that Empress Dowager Song would make every exception for her. So even if Song Jinning casually grabbed a piece of grass for her on the roadside, it would still be better than a gold leaf given by others.

She hurriedly grabbed her chopsticks.

Plants aside, the snacks are really good. It has the freshness of a tree, and it is also very fragrant and delicious.

Then she put down the chopsticks in her hand and asked Song Jinning, “Have you asked someone to send these snacks to the emperor?”

Who is thinking about giving him food?

“I don’t know if this suits the emperor’s taste, so I didn’t ask anyone to send it.”

Empress Dowager Song thought to herself that this is not good.

Even though the two of them have already completed the wedding night, the emperor must still be reluctant with this marriage. After all, he didn’t visit Weiyang Palace last night.

Ning’er is still the same. If she doesn’t take advantage of the emperor while he is newly married, what will happen when he accepts concubines later?

So he called Cui Nong over and told her: “Send the rest of these snacks to the Emperor.”

She also specifically told Cui Nong: “Remember to tell the emperor that this was made by the Empress’s kitchen.”

Alas, she still has to worry about them.

2) 蒿子粑粑 (Hāozi bābā)- There is no direct translation. But here is how Haozibaba looks like: