You dont have javascript enabled! Please enable it!
Skip to content
After Transmigration, The Yandere’s Kiss Extends My Life

The next day, when Yan Mu awoke, she was already lying on the elmwood table in the main hall.

The weather was turning colder, but she didn’t feel the chill at all.

Her body was covered with a piece of clothing, which seemed to be Yu Yuan’s outerwear.

She seemed to have been sitting in the covered walkway1Might look something like this: 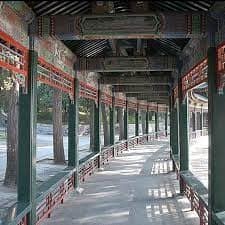 with Yu Yuan to get some air, and somehow fell asleep.

Yan Mu was about to get up, but she found an arm wrapped around her waist. She slightly turned her head and found herself in Yu Yuan’s arms, her back pressed against the teenager’s firm chest.

The teenager didn’t have any signs of waking up.

His breath was sprinkling on Yan Mu’s ear, dyeing her delicate and white ear pink.

When his lashes brushed her fingertips, it felt numb and tingly, agitating her heart.

Yan Mu swallowed and her gaze slowly moved down.

The bridge of the teenager’s nose looked extremely refined, especially the tip of it, which was a little curved.

Yan Mu’s index finger slid all the way down and gently nudged the tip of the teenager’s nose.

The teenager’s eyes were still closed, showing no signs of waking up.

Yan Mu was outrageously bold in her desires2色胆包天 (sèdǎnbāotiān) – debauched (idiom); will go to any lengths for s*x; be utterly reckless in s*x; be recklessly l*stful. Seeing that Yu Yuan didn’t wake up, she simply continued to explore his face.

Yan Mu couldn’t help but remember those nights of stealing kisses, and she suddenly felt her heart beat even faster.

It was daytime now, and Yan Mu didn’t dare to steal a kiss.

Although she desired Yu Yuan, she was still basically a coward.

So, she swallowed again, and tremblingly reached out her hand to touch the teenager’s lips.

His lips were extremely soft, like clouds in the sky.

Yan Mu stroked them a few times, blushing, and just when she was about to retract her hand, she was caught in the act by the teenager who’d at some point woken up.

Yu Yuan’s eyes were dark and he grabbed Yan Mu’s index finger that was making trouble3兴风作浪 (xīngfēng-zuòlàng) – stir up trouble; fan the flames of disorder; to stir up havoc.

“What is Ah Mu doing?” His tone sounded extremely innocent, as if he was oblivious.

“I……” Yan Mu was caught red-handed, so she was momentarily speechless.

“Didn’t Ah Mu want to keep your distance from me? Why are you secretly touching me?” Yu Yuan blinked, then leaned over to Yan Mu’s ear and said, “Actually, if Ah Mu wants to touch me, why do you need to do it secretly when I’m asleep? You can just touch me openly.”

“Oh, it was just a mosquito.” Fragments of a smile emerged in Yu Yuan’s eyes.

She removed the arm around her waist and got out of bed to wash up.

Only after she had finished washing up did Yan Mu awkwardly ask, “Last night…… how exactly did we end up sleeping together?”

Could it be that something absurd happened last night?

Don’t tell me…… I forced myself on Yu Yuan last night?!

“Ah Mu, what are you thinking about?” A hint of a smile flashed through Yu Yuan’s eyes as he said, “You fell on my shoulder, and when I carried you back, you wrapped your arms around my neck and wouldn’t let go, so I had no choice but to sleep together with you.”

“Of course.” Yan Mu panicked inside, and seeing that Yu Yuan was giving her a way out4台阶 (táijiē) – flight of steps; steps leading up to a house, etc.; stairway; fig. way out of an embarrassing situation; chance to extricate oneself from an awkward position;, she immediately nodded her head repeatedly.

She was afraid that Yu Yuan would see the discomfort in her heart, so she changed the topic and said, “I’ll go check on that child from last night.”

After speaking, she walked towards the warehouse.

Ah Yu was still sleeping inside. He was covered in dust and dirty as a little rat.

Yu Yuan always felt like the child was taking away Yan Mu’s attention, and he found him extremely unpleasant to the eye.

So, he simply kicked the door.

The loud “bang” suddenly woke Ah Yu up, who was still sleeping.

He bounced up in alarm and looked around in panic.

Ah Yu still hadn’t recovered from the fright and he nodded suspiciously.

He stared at Yu Yuan for a moment, then seemed to think of something as he suddenly timidly tugged at the hem of Yan Mu’s clothes.

“Yan jiejie, that brother is so fierce.” After speaking, he pouted aggrievedly.

“You scare people at night as a ghost, is it because you can’t get up during the day?” Yu Yuan mocked and ridiculed5冷嘲热讽 (lěngcháo-rèfěng) – frigid irony and scorching satire (idiom); with freezing irony and burning satire; with biting sarcasm him from the side.

His gaze fell on Ah Yu’s hand that was pulling Yan Mu.

His sharp gaze was so strong that it almost pierced through his chubby little hand.

“……What does that have to do with you!” Having been called out6说中 (shuōzhòng) – to hit the nail on the head; to predict correctly by Yu Yuan, Ah Yu immediately lashed out.

“Alright, that’s enough.” Yan Mu felt like if this went on, these two would cause a commotion. “Yu Yuan, go inform the people back in the residence to start preparing matters for the opening of the bookstore, I’ll wait here to sign the contract.”

As long as she backed him up, he couldn’t stir up any trouble7风浪 (fēnglàng) – wind and waves.

Yu Yuan’s face was as dark as the bottom of the ocean, and he was so angry that he almost crushed the door frame.

He walked out of the shop with a cold face, just wanting to see if Yan Mu would persuade him to stay.

As a result, when he turned around, he actually found Yan Mu wiping the little boy’s face!

He’s already eight and still needs Ah Mu to help him wash his face! How shameless!!

Yu Yuan pursed his lips and walked towards the residence with a chilling aura surrounding him.

His features were picturesque and his skin was delicate. 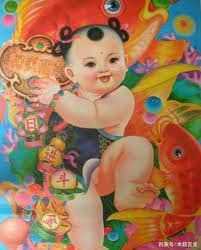 that had come to life.

She originally wanted to go out and buy Ah Yu a few changes of clothes while it was still early, but he was unwilling to leave.

Yan Mu had no choice but to take his measurements and went shopping for children’s clothing herself.

She didn’t know what colors Ah Yu liked, so she bought one of each.

When she returned, she happened to meet the agent who came to inquire about the situation, so she took out her silver drafts9银票 (yínpiào) – a form of paper money; (in former times) banknote with a value in silver and bought the shop.

Watching her spending money like water on the side, Ah Yu took the clothes and remained silent for a while before whispering, “Yan jiejie, are you and Yu Yuan very rich?”

“So so,” Yan Mu casually said, without looking up as she was busy cleaning.

“Yan jiejie is your family in business, or officialdom?” Ah Yu tentatively asked.

“What are you interrogating her for?” Yu Yuan had just returned when he heard Ah Yu tentatively questioning Yan Mu.

There’s definitely something wrong with this boy.

Ah Yu’s small face slightly reddened and he mumbled, “I didn’t mean that……”

After speaking, he seemed to feel a little embarrassed to stand there doing nothing, so he picked up a broom and learned to sweep the floor like Yan Mu.

Unfortunately, Yan Mu choked on the dust and coughed, and Yu Yuan hurriedly pulled her to the courtyard to get some fresh air.

He might punish Yu Yuan, but he would never lay a hand on Yan Mu.

“Cough, cough, cough.” Yan Mu’s body and the ends of her hair were covered in dust.

Yu Yuan took out a handkerchief and carefully wiped the dust for her.

His eyes were extremely focused, as if there were only Yan Mu and him in the entire world.

For a moment, Ah Yu felt like he was a little unnecessary.

But he had nowhere to go, so he had to force himself to take this opportunity.

He was already born white and delicate, and with his look of guilt and grievance, he looked adorable enough to melt one’s heart.

Yan Mu beckoned him over and said, “If you have something you don’t know in the future, you can ask Yu Yuan gege11哥哥 – brother/elder brother.”

That man was very brutal, and if Yan Mu hadn’t stopped him, he would’ve been thrown out by Yu Yuan.

He raised his head to glance at Yu Yuan, but saw that Yu Yuan, who was usually cold and ruthless, actually had red-tipped ears!

Although he hated Yu Yuan, he liked Yan Mu.

Support "After Transmigration, The Yandere's Kiss Extends My Life"

Hello ~(￣▽￣)~* Thank you very much for reading! Feel free to contact me if you have any questions or there are any mistakes in my translations. Also, if you like my work, please consider buying me coffee. Your support is greatly appreciated!