Skip to content
After Transmigration, The Yandere’s Kiss Extends My Life

Father Yan was afraid that the heavy rain would wash away the fields, so he put on his woven rush raincoat1made of straw and hurried out. Before he left, he had asked Yan Mu to take good care of Yu Yuan.

Naturally, this was what Yan Mu wanted. She changed out of her wet clothes and knelt beside the stove to start the fire.

On the stove, the boiling water was gurgling and bubbling, bringing out puff after puff of steam, and also a whiff of an egg’s fragrance. That was the egg that Father Yan had specially saved for Yan Mu to nourish her body.  Yan Mu mixed it with water and added some diced cured meat into it to make a water-steamed egg.

Seeing the time was done, Yan Mu lifted the lid, wrapped the bowl with a towel, and took it out.

The water-steamed egg was crystal yellow in colour and jiggled temptingly with Yan Mu’s movements. Yan Mu gulped and sprinkled a few drops of sesame oil, some soy sauce, and a little bit of aged vinegar on the egg2It should look like this: She divided the steamed egg into three portions, took out a separate portion and put it into a small bowl, and brought it over to Yu Yuan.

She had carefully thought it over just now. The original owner and Yu Yuan did not have any interactions, so Yu Yuan shouldn’t think that she was trying to steal a kiss.

She was the one acting too guiltily. This is bad. Yu Yuan is too smart. Instead, he will easily notice that something is wrong.

“It’s really delicious and I have added some diced cured meat into it.” Yan Mu said as if she was coaxing a child, “Steamed egg is easy to digest, we will have our meal later.” After saying that, she shoved the small bowl into Yu Yuan’s hand.

Her hand accidentally touched Yu Yuan’s, and before she could react, Yu Yuan quickly took the bowl. He stared straight at Yan Mu. He was eating the steamed egg, but looked like he was deep in thought.

The teenager’s gaze did not have any hint of indecency, but being looked at by such a handsome face all the time…… even if it was just looking, it was enough to make Yan Mu, this superficial dog’s heart beat faster.

She slightly turned away her head and gave a mental thumbs up. As expected of the male lead that was created by me, he’s so handsome even while eating!

Seeing Yan Mu turn her head, Yu Yuan silently lowered his gaze and focused his attention on the steamed egg.

Spoonful after spoonful, Yu Yuan’s Adam’s apple rolled as he ate quickly and quietly. He scraped the last bit of the steamed egg with a hint of reluctance, and longing lingered in his eyes.

He lifted his eyes and looked at Yan Mu with a lost gaze as if he was complaining unhappily—— It’s finished.

Yan Mu suddenly felt that her heart had received a critical hit.

“Wait for a while, I will go get you another bowl.” Yan Mu, who was blinded by his beauty, held the bowl and prepared to head to the kitchen.

At that moment, there was a rude knock on the door from the outside of the small courtyard.

Yu Yuan’s back suddenly tensed up. He lifted the quilt and limped out of the room.

“Hey, don’t go. He will definitely bully you again if you go,” Yan Mu extended her hands and blocked them in front of Yu Yuan.

Yu Yuan’s steps suddenly stopped. He looked at Yan Mu with an expressionless face, and said with a hoarse voice, “If I don’t go out, he will make trouble with you guys.”

Yan Mu froze in place. A strange feeling welled up in her heart.

It was nice and warm, somewhat comfortable, and a little sad.

For a moment, she didn’t know what she should say, and could only follow behind Yu Yuan in silence.

After opening the door, it was really Dog Egg Zhang.

“Little b*stard, are you quite surprised to see me alive?” said Dog Egg Zhang with a somewhat sinister smile. His body was bruised and battered from the fall, but they seemed to be only flesh wounds and he did not injure his muscles and bones.

Yu Yuan’s expression looked cold and he spoke with some disdain, “I don’t understand what you mean.”

“You!” Dog Egg Zhang was furious. Today on the mountain, he shot a rabbit, but it wasn’t completely dead and had been struggling to escape. The summer grass was lush, and before he knew it, he had chased it to a small slope.

He was about to catch the rabbit, but he suddenly felt a strong force on his butt, and he rolled down the hill without realising what had happened at first. Luckily, it was just a small hill, and his shirt got hooked by a tree halfway, so he only suffered some superficial injuries.

How unlucky. Not only did he lose a rabbit on a hunt, but he almost lost his life too!

Thinking of this, Dog Egg Zhang’s gaze on Yu Yuan contained a little restrained fear. Although there was no evidence, his intuition told him that this was Yu Yuan’s doing.

Dog Egg Zhang whined and more than half of his haughtiness disappeared. He was holding back a stomach full of fire3anger with no place to release, his eyeballs were spinning around, but after seeing Yan Mu, his gaze instantly glued to her body.

“Yo! Isn’t this Sister Yan Mu? You are getting more and more good-looking.” Dog Egg Zhang rubbed his hands together and smiled lewdly.

But unfortunately, Dog Egg Zhang and the original owner were still classmates at the private school. She silently sighed and stole a glance at Yu Yuan to wash her eyes4Look at something nice/handsome/pretty after seeing something disgusting ugly.

Dog Egg Zhang knew nothing of Yan Mu’s inner conflict as he got close and said, “Sister Yan Mu hasn’t been to the private school for a long time, I’ve missed you very much.”

With that, his hand went to pat Yan Mu’s shoulder. Unfortunately for him, before he could put his hand down, it was held by Yu Yuan midair.

“W-what do you want?” Dog Egg Zhang puffing up his chest, he had a hard mouth and never admitted fault. “What does it have to do with you if I talk with Sister Yan Mu?”

“Of course it has nothing to do with me.” Yu Yuan suddenly smiled and let go of Dog Egg Zhang’s hand.

The young girl was small and delicate, her face was pale and her eyes were gleaming with tears, aro*sing Dog Egg Zhang.

“You are quite sensible.” Dog Egg Zhang put away his surprise, stuck out his face and came up to Yan Mu, “Sister Yan Mu, you are really attractive……”

Yan Mu’s expression paled and she continuously moved backward. Only when her back touched the cold wall did she realise that she had nowhere left to retreat to.

Dog Egg Zhang’s face was getting closer and closer, Yan Mu’s stomach was churning and she closed her eyes in slight despair.

A “BAM5Reminds me of the ‘bonk’ meme but imagine the bonk from the back xD Here: 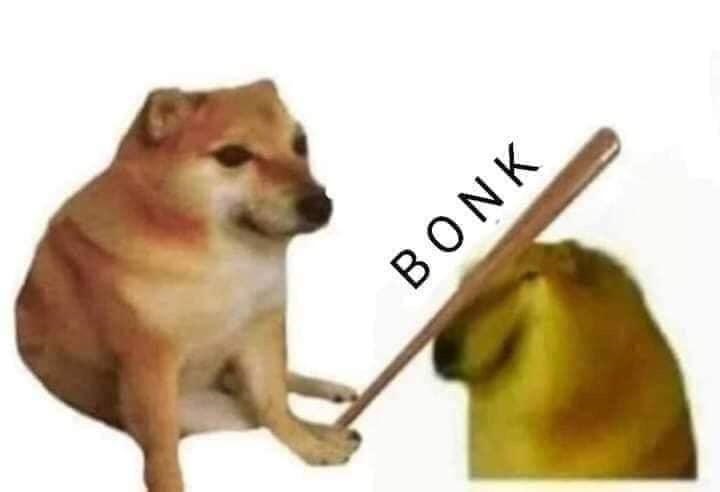 ” sound could be heard, soon followed by the sound of a body dropping to the ground. A cold snort from Yu Yuan seemed to be heard among the noise.

“Yu Yuan?” Yan Mu opened her eyes a slit. Her eyes were watery, the tip of her nose was slightly red, and her pearly white teeth were biting her lips, making her look aggrieved and pitiful.

Yu Yuan saw it and his heart became irritated for no reason. He suppressed the irritation in his heart and threw away the firewood in his hand expressionlessly.

This annoyance was the same as when he had seen the despair in the young girl’s eyes earlier. And so, his body couldn’t help but react.

“…… Alright,” Yan Mu sniffled. Seeing that she was safe, her sanity began to gradually return.

“You knocked him out, how are you going to explain things when you go back?” asked Yan Mu worriedly.

“Only if he isn’t left alone for the rest of his life.” Yu Yuan tugged the corners of his mouth mysteriously, and suddenly revealed a strange smile.

After speaking, he grabbed Dog Egg Zhang’s collar and headed out. After walking halfway, he suddenly turned back and ambiguously said, “After tonight, we’ll be even.”

Yan Mu looked confused, “……. What are you talking about?”

That night, when Father Yan came home, Yan Mu talked to him about what had happened. Father Yan was naturally furious, and he intended to rush over to fight right then and there.

So she tried her very best to persuade Father Yan to drop this matter for the time being for Yu Yuan’s sake. However, after this incident, Father Yan’s favourable impression of Yu Yuan greatly increased.

Father Yan was persuaded to calm down with great difficulty, but another crisp knock on the door could be heard outside the courtyard.

Father Yan thought it was Dog Egg Zhang, and the anger that he had managed to suppress came roaring back up. Before Yan Mu could stop him, Father Yan had angrily pulled open the courtyard door.

There was nobody outside the door, only the mingled sounds of cicadas and frogs.

“Where are they?” Father Yan was bewildered.

“There’s a rabbit on the ground!” Yan Mu exclaimed in surprise.

She stepped forward and picked up the rabbit to check it out. The rabbit had been wounded from an arrow and it looked very fresh as if it had been hunted just today.

Somehow, Yan Mu suddenly thought of the words Yu Yuan said, “After tonight, we’ll be even.”

She remembered that when she had first made Yu Yuan’s character, in order to magnify the male lead’s cuteness, she had added the tsundere6presenting as unfriendly and blunt, but warm and tender inside (loanword from Japanese “tsundere”) trait for him.

Yu Yuan: I ate a bite of your egg and repaid you with a rabbit. We’re even now.

Dog Egg Zhang: That rabbit was clearly hunted by me!

Support "After Transmigration, The Yandere's Kiss Extends My Life"