The noodles were very easy to make so it only took a short time before Gu Yu and Bai Lu returned.

After bringing the food box to the table, Gu Yu took the food from the box with both hands and then put it in front of Song Jinning.

Not only the noodles, but also shredded chicken with cold sauce, roasted duck with soy sauce, and sour pickles were placed in front of her. The sight can really make one’s eyes move.

Song Jinning was really hungry, so she immediately took the chopsticks that Gu Yu handed over, and lowered her head to eat.

This soup is indeed the one made by Zhao Mama. The soup is very flavorful, and the aroma is very rich.

There was also a fried egg on top.

Song Jinning likes to eat well done fried eggs, and Zhao Mama knows her preferences well, so the fried eggs were golden on both sides, and a crunch can be heard with each bite.

Gu Yu and Bai Lu looked at this scene nonchalantly. Although the two of them are high ranking servants, they are not the masters after all. So like every other person, they only eat when necessary.

Watching him walk out of the palace gate, she asked Song Jinning quietly: “Mistress, His Majesty is gone. What do we do?”

Song Jinning thought, isn’t it a good thing that he is gone?

“Don’t mind it.” Song Jinning picked up the chopsticks and said. “Go and make the bed.”

Not only did she wake up very early today, but she was also tired all day, so she naturally wants to sleep early.

The groom left on the wedding night, and the bride is not sad, but rather happy to see him leave.

Mistress, are you really stupid?

However, Gu Yu had to obey so she turned around to fix the bed.

On the other hand, Li Chengxuan strode out of the hall, and Zhou Jing, who was standing at the corridor, immediately greeted him and called out, “Your Majesty?”

Zhou Jing doesn’t understand why his master will come out now. And the look on his face is not good…

Li Chengxuan did not stop, his handsome face was calm, and he continued walking forward.

Zhou Jing had to trot all the way but still barely managed to keep up with Li Chengxuan.

Even if he will be punished, he still has to remind Li Chengxuan.

“Your Majesty, today is your wedding night. If you leave behind the Empress, and it reaches the ears of the Empress Dowager, I’m afraid…”

Zhou Jing didn’t even finish what he was saying, but Li Chengxuan is wise. He already knew what Zhou Jing was talking about.

Li Chengxuan stopped when he heard these words, and his face became gloomy.

Zhou Jing watched, his body stiff and his eyes fearful.

Anyway, as long as he can’t see the anger on the Emperor’s face, then he can pretend that he doesn’t know that the Emperor is angry.

After a moment of silence, he suddenly heard Li Chengxuan’s voice.

“Is there anything to eat?”

Zhou Jing was taken aback for a moment, and then he reacted.

“Yes, yes!” It turns out the reason why his master came out just now is because he is hungry.

But didn’t the two servants of the empress enter the hall a food box? The empress dared to eat alone without the emperor?

The empress is really as bold and arrogant as the rumors, and doesn’t even put the emperor in her eyes.

Zhou Jing was slanderous in his heart, but he called two small eunuchs over and instructed them to go to the imperial kitchen to fetch food immediately.

Song Jinning’s kitchen is in her own Weiyang Palace, and the Imperial Kitchen for the Emperor is quite far away, so even though the two eunuchs walked fast, it still took about a quarter of an hour to come back.

And after returning, the two eunuchs immediately knelt in front of Li Chengxuan.

Because it is the day of the Emperor’s wedding, the imperial kitchen was very busy. After the wedding banquet finally ended, the cooks were relieved. Seeing that the night was getting dark, they thought that Li Chengxuan would want to enjoy his time with the empress, so they put out the stove and went back to rest, leaving only two cooks on duty. But who knew that in the middle of the night the emperor was actually hungry and wanted to eat food.

The two eunuchs did not expect that it would turn out like this, and they were fearful.

People who are hungry, their tempers are never good. What’s more, Li Chengxuan is the emperor above all. Even if he can’t be angry at some ministers, he has every right to be angry with servants in the palace.

“It takes so much time to cook noodles, what does zhen1朕 (zhèn): Royal ‘We’. Illeism used by the emperor to refer to himself want you to do?”

With these words, the two eunuchs felt even more fear.

But Li Chengxuan thought about it again. So what if the imperial kitchen can cook some noodles? It wouldn’t be as good as the one Song Jinning had just now.

Li Chengxuan refused to admit that his saliva almost flowed out when he smelled the scent of Song Jinning’s food.

His self-control has never been this bad!

After he calmed down, due to the feeling of hunger in his stomach, he told Zhou Jing: “Tell zhen what kind of pastries it is.”

He lifted the lid of the food box and looked. Seeing that it was a plate of Osmanthus Cake and Jujube Rice Cake2枣泥 (zǎo ní): Jujube Sticky Rice Cake. Traditional food that is usually served during Chinese New Year. It has a sticky, taffy-like consistency: 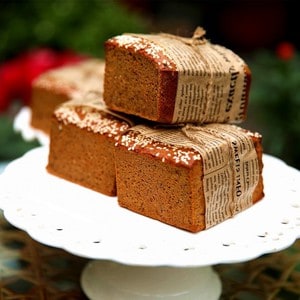 Li Chengxuan snorted and said nothing. But Zhou Jing knew that this meant he was okay.

After the two eunuchs left, Li Chengxuan walked and sat on a pavilion outside Weiyang Palace.

But Zhou Jing hoped that he would go back to Weiyang Palace now. Otherwise, if Empress Dowager Song hears about it, he’s afraid that something might happen.

Li Chengxuan was unwilling to go back. At least not now.

Song Jinning had noodles and various side dishes when she ate. She invited him to eat with her, but he was very stubborn and refused. At this moment, eating these two plates of pastries….

Even though these two plates of pastries are exquisite and unique, and both are his favorites, when they are compared with what Song Jinning ate…

He then sat down on a stone seat. Upon seeing this, Zhou Jing hurriedly picked up the pastries and put them on the stone table.

It was March, and while the sun shines brightly during the day, as soon as the night starts, the wind will start to get cold.

Zhou Jing instructed a eunuch to close all the windows so that the pavilion will be warmer.

When he turned around, he saw Li Chengxuan taking a piece of Osmanthus Cake and putting it in his mouth.

After seeing that Li Chengxuan no longer ate, Zhou Jing hurriedly offered a bowl of hot tea with both hands.

Taking advantage of Li Chengxuan drinking tea, Zhou Jing thought for a while, and persuaded softly: “Your Majesty, there is a saying that one must first suffer with their bones, stomach, and their body in order to recieve great responsibility3圣人有句话说的好，天将降大任于斯人也，必先苦其筋骨，饿其体肤，空乏其身: When heaven is about to confer a great responsibility on any man, it will exercise his mind with suffering, subject his sinews and bones to hard work, expose his body to hunger, put him to poverty, place obstacles in the paths of his deeds, so as to stimulate his mind, harden his nature, and improve wherever he is incompetent, MENG TZU, fourth century BCE. The empress dowager promised that if you marry the empress, you can be in charge of the government. You have gone all the ninety-nine steps, and you must not fall short in this last step4这九十九步都走了，万不能在这最后一步功亏一篑: A Chinese proverb meaning don’t give up on the last minute. Continue doing it since you’re so close to achieving whatever you’re achieving., don’t you think?”

During this time, it was Empress Dowager Song who helped him to eliminate the treacherous ministers one by one.

Although the court was peaceful under her, power is like a drug. Once you have it, it is very hard to give it back. Empress Dowager Song continued to control the government for six years and had no intention of returning it to Li Chengxuan.

After hundreds of officials wrote petitions to return the political power to the Emperor, Empress Dowager Song finally agreed.

If Li Chengxuan married her niece Song Jinning, after the wedding, she would return the power to Li Chengxuan and live peacefully in the palace.

It was beneficial to Li Chengxuan in more ways than one. But even though Li Chengxuan gained a lot from this marriage, how could Li Chengxuan not feel humiliated in his heart under such circumstances?