While washing and dressing, he kept a calm face, making the servants involuntarily worried, for fear that he would suddenly become angry.

There was no effect on Song Jinning. She feels that she has done nothing wrong at all, so why should she be guilty or be disturbed?

After she finished washing up, breakfast was served on the table.

Song Jinning didn’t want to eat with Li Chengxuan, but since the two of them had become allies last night, and the size of the food on the table looked like it could feed a few people, she had no choice but to ask Li Chengxuan to eat reluctantly.

Li Chengxuan did not answer, and wanted to leave with a calm face.

After asking Li Chengxuan what he wanted to eat, Zhou Jing skillfully filled a bowl with food and placed it in front of him.

Li Chengxuan took a sip of the bean curd and took a bite of the fried dumpling.

He raised his head and asked Song Jinning, “In addition to meat, what stuffing is in this dumpling?”

Song Jinning thought, how would I know? I haven’t even tasted it.

She picked up a fried dumpling and took a bite. She chewed for a while before she said: “Jicai1荠菜 (Jìcài)- a wild herb. Most commonly used as filling for jiaozi (dumplings). These are the jicai dumplings SJN mentioned: 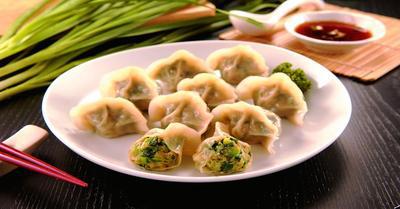 Song Jinning looked at him annoyingly, but his reaction was quite justified.

Firstly, people in the royal family usually eat meat, and rarely indulge in vegetables. Secondly, wild vegetables are used by common people to feed their livestock or as a source of food during a famine. Letting the Emperor eat vegetables, it is really a breach of etiquette.

I’m not forcing you to eat. If you don’t want to eat, then don’t eat!

After taking a few bites, she nodded and said slowly: “Yes it is the wild vegetable.”

But it was delicious and very fresh.

When Song Jinning gave him food last time, it was Haozibaba made with wild vegetables, and now this dumpling is also made of wild vegetables. Looking at all the green dishes on the table, are these also wild vegetables?

How could Song Jinning eat wild vegetables like this? Could it be that her family is poor?

But this is absolutely impossible.

As the only Prince in Yunnan, Prince Nanyang had the authority to levy taxes on the people there. The bountiful oil in Yunnan is also another source of money for Prince Nanyang. And who in the empire doesn’t know that Song Jinning is Prince Nanyang’s favorite child?

Unless Song Jinning wants to eat it herself…

As for why she wants to eat it, it’s because these ‘wild’ vegetables are delicious.

Even Li Chengxuan has to admit that both the Haozibaba and this Dumpling are very good.

When Zhou Jing heard that the dumpling was made with a wild vegetable, he was ready to see Li Chengxuan spit it out.

But not only did Li Chengxuan not spit the dumpling out, he also ate the whole thing.

And after eating one, he placed another one in his bowl.

He felt that an Emperor’s life is really not easy.

In order to stabilize his power, he must do things that are against his will.

When Li Chengxuan finished eating dumplings, he stared at the white cakes.

Zhou Jing was instructed to tear a small piece, and Li Chengxuan took it in his hand and looked at it.

The surface looks no different from ordinary white flour cake, but the two sides were golden. After taking a bite, Li Chengxuan noticed the faint taste of wine.

Li Chengxuan was surprised. So he shamelessly asked: “What is this cake made of?”

Your Majesty, are you a baby? Why are you asking about everything?

“The flour is mixed with water to form a dough, and then a bit of wine is added. After fermentation, it is fried on low fire.”

After a short pause, Song Jinning asked: “Your Majesty, do you know where flour comes from?”

Song Jinning has every reason to suspect that Li Chengxuan is so sheltered that he hasn’t seen wheat grains before.

“How could zhen not know? Every year zhen has to sacrifice to the heavens at the beginning of spring, and pray for good weather.”

You are just a lady, what can you know?!

However, Song Jinning just sighed, put down her chopsticks, grabbed a quail egg from the plate and peeled it.

Seeing Li Chengxuan look at her, she took another quail egg from the plate and handed it over: “Your Majesty would like to eat this?”

Zhou Jing saw it and took it from Song Jinning’s hand to peel it for Li Chengxuan.

But Li Chengxuan saw that it was easy for Song Jinning to peel, so he thought it was not difficult.

He doesn’t want to be looked down upon by Song Jinning. Just now when she asked him if he knew where flour came from, didn’t she look down on him? Going past Zhou Jing, he directly reached out and took the quail egg.

Just like Song Jinning, he knocked the quail eggs on the table.

He didn’t expect to use so much force, breaking the quail egg in half.

Li Chengxuan did not say anything, and immersed himself in peeling the eggs.

But how can he do this? Peeling eggs was already hard, not to mention that these are quail eggs.

Zhou Jing couldn’t bear to look straight, and silently turned his head aside.

As for Song Jinning, although she bowed her head and tried her best to endure a smile, her shoulders were shaking.

The Emperor’s ability to take care of himself is no better than a kindergartener’s.

Li Chengxuan wanted to give himself face. Song Jinning laughed at such a trivial matter. How is he giving himself face like this?

Fortunately, he is not a tyrant who takes other people’s life at every turn. Although he was laughed at, he kept his face calm, and didn’t even shout.

As for the quail egg he was peeling, he threw it on the plate with a huff.

Then he lowered his head and ate bean curd, without speaking again.

Suddenly, a small white porcelain dish appeared in his sight, with a peeled quail egg inside.

As for the hand pushing the small dish, it was white and tender just like the peeled quail egg.

“Your Majesty, please eat.” It was Song Jinning’s voice enduring a laugh.

She can’t annoy Li Chengxuan too much, right? In the future, she will still live in this palace for a period of time, and Li Chengxuan will be her benefactor.

So instead of waiting for Li Chengxuan to ask questions, Song Jinning took the initiative to introduce all the dishes on the table.

“The assorted pickles in this box were all made by Zhao Mama. Your Majesty, do you want to try it? This dish is mixed with dried tofu with Malantou2马兰头 (Mǎlán tóu)- Also known as Indian Aster. It is a plant commonly found in the slopes of hills and ridges between rice fields. This is the Malantou with tofu SJN mentioned: 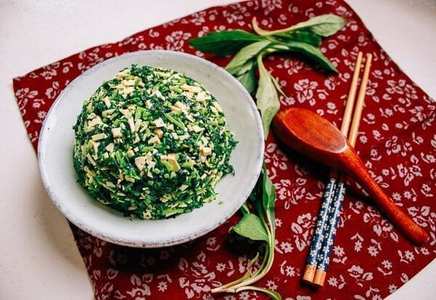 . Chenqie put some sesame oil on it, so it smells very fragrant. It tastes very delicious and refreshing.”

“This Malantou is also a wild vegetable. Your Majesty must have never eaten it before? But even though it is a wild vegetable, it tastes very delicious. During spring, this malantou is very popular in Yunnan.”

“This dish is a current seasonal dish, the famous caitai3菜苔 (Cài tái)- a plant from Wuhan. Caitai has purplish stalks, dark green leaves, and little yellow flowers. It has a similar taste to mustard greens. This is the fried caitai SJN mentioned: 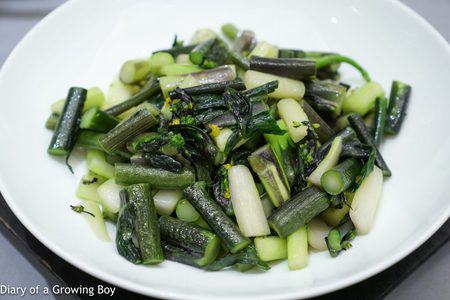 . It is not very complicated to cook, but it is cooked with boiled lard and stir-fried for a while. It is not only refreshing, but also sweet.”

“As for this dish, it is a folk snack called fermented tofu4豆腐乳 (Dòufu rǔ) – Fermented Tofu. Also known as ‘Stinky Tofu’ because it’s, well, stinky. This is a classic dish in China and Hong Kong. I’ve personally tried it, but it’s not for me. 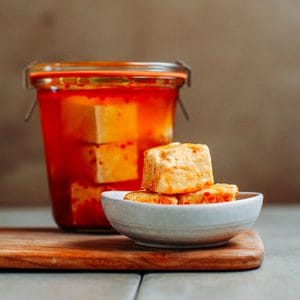 . The tofu is cut into small pieces and placed in a jar to let it naturally ferment. The moldy tofu cubes are then placed in wine, then rolled in chili flakes, placed in a jar, then sealed and set aside for a while.”

“When you want to eat it, you only need to pick the fermented tofu from the jar. It can be eaten directly, or it can be drizzled with sesame oil. Both tastes are different. Chenqie likes to eat it by itself, your majesty should try it.”

This surprise is because of two reasons.

First, why would someone eat moldy food? and Secondly, how come Song Jinning knows these folk snacks?

Isn’t she from a noble background? Shouldn’t it be that she doesn’t go out, and practices sewing and calligraphy to entertain herself?

Song Jinning guessed what he was thinking at a glance.

“My father is obsessed with food, so chenqie is also affected by it. Not only does he know how to eat, he also knows the various ways of eating each food.”

In fact, it is because she was a foodie in her previous life. Although she was a little weak in her cooking ability and couldn’t fully replicate the delicacies she liked, the cooks her father had hired were very good, so she only needed to give them an idea and overview of the dish, and they would be able to make it.

It is actually her father who often asks her about food.

But these things can’t be said to Li Chengxuan, so Song Jinning can only use her father as an excuse.

And obviously Li Chengxuan believed it too, because the surprise on his face was gone.

Song Jinning still had the heart to be compassionate to him, so she smiled and asked, “Since Your Majesty already knows the origin of this fermented tofu, does your majesty want to taste it?”

Come on, don’t discriminate because it has mold on it. It’s actually very delicious.