You dont have javascript enabled! Please enable it!
Skip to content
I Accidentally Connected My Bluetooth to Someone Else’s Phone in the Subway

《Sugar》 , a song from Maroon 5 seemed to always carry an atmosphere of surprise because it’s MV was exceptionally memorable. Anyone who had seen it and listened to the prelude would automatically be mentally transported to the wedding venue and begin dancing along.

Actually, I wanted to take this opportunity to discuss with Lu about the MV. It would be a good way to keep the conversation going because songs were a surefire conversation generator.

It was a pity that a brainstorming meeting was coming up, cutting off the possibility of having a long conversation.

I replied: I should have picked this as my English name back then, Kiki just doesn’t sound good enough.
I sent another message: But I have to attend a meeting soon. I’m not sure when it’ll end, so should we try for noon?

Lu had been typing, but the second after I sent the second message, his “typing” status disappeared.

After a moment, his re-edited message appeared.

I also had this song in my playlist.
I think, if we put our playlists side by side and played a matching game, we would be able to clear it very quickly .

As I recalled the morning to determine my next step, I remembered the stop he had gotten off at. It was at Xilin Lake Station. This concept of this landmark was unique. As everyone knew, most of the young men and women who got off at that stop were employees at the Guangniu headquarters.

Guangniu, a major internet company. Was he a programmer? Oh gosh, a plaid shirt appeared in my mind. But his voice sounded like a person who would only wear white shirts.
I couldn’t stop myself from crafting his character.

Thankfully, when the boss came into the meeting room and interrupted to look for someone, everyone finally turned serious and quit loafing around, getting back to brainstorming ideas.

I didn’t go downstairs for lunch in the afternoon. Instead, I ordered some grilled cold noodles.3[3] Grilled cold noodles is a local specialized snack of the Chinese province of Heilongjiang, cooked by special cold noodles like pieces of paper, with eggs, onions and other auxiliary materials, The main condiment is sweet bean sauce. – from Wikipedia 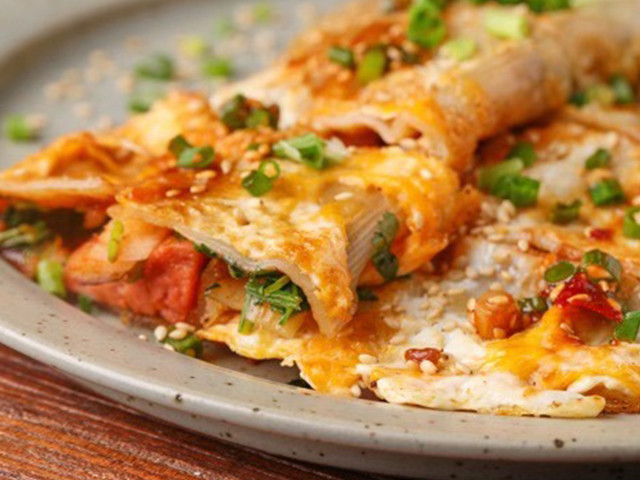 After placing my order, I opened up my WeChat and sent a message to Lu: Are you busy?

He didn’t answer as quickly as he did in the morning, but you also couldn’t describe it as slow: A little bit.

I replied: You definitely aren’t a civil servant.
He replied: It would be great if I was.

His words carried the tone of an overworked employee, which made me smile: Have you eaten yet?

Lu replied: Not yet, you?
I replied: I haven’t either, I’m waiting for my delivery.

He asked: Where from, I’ll check it out as well.
I told him the store name: The owner is from Northeast China. Apparently, the taste of his food is very authentic. However, I’ve never tasted anything authentic from there.

Lu returned: I’ve ordered from there before.

I messaged: Seems like we aren’t too far from each other.
I sent another message and asked: Will it disturb your work if we’re chatting?

Lu seamlessly shifted to another focus: I’m working, but chatting won’t disturb me.

I replied very quickly: Is it because you’re sitting in front of a computer?
The tone of Lu’s words sounded like he was looking around adorably: Hm? Did you install some cameras?

I laughed: It’s because I had a guess.
I hesitated for a moment, but still ended up saying: You’re working at Guangniu.

Lu: Where else could it be?
Lu: After all, it’s Xilin Lake, this wretched place.

I propped my head on a hand. The area where the back of my hand made contact with my face felt slightly hot: But Guangniu is pretty good.

Lu returned with one word: Siege.

I understood what he meant, I was about to call him out on his humblebragging——

He suddenly asked: How come you’re suddenly so curious?
Lu added: About me.

My heart sped up slightly: If I wasn’t curious, why would I get off to look for you?

He seemed to recognize the logic and was helpless in the face of it: I had wanted to maintain a sense of mystery.

The hand I had propped my head up on was moved to my temples, rubbing them lightly. But it wasn’t because it ached: If you are curious about me, I can tell you a few things but it probably wouldn’t be something as concrete as my workplace.

Lu replied: No, it’s fine, to me, you’re Sugar and not Kiki.

Hm… I must admit, amazing, this man really was amazing.
To think he would bear no objection to this kind of unequal exchange of information, letting me take advantage of him from morning till now. My face turned red again and the smile on my face grew even bigger. All from a combination of feeling a little guilty, the intimacy of his words, and this special treatment.

In the afternoon, I shared the news of this happy encounter with my friend: Would you believe it if I told you that in one morning, I was crushed by the words of a stranger who I’ve never even seen the face of so many times, I can’t even count?
My friend replied: You can arrange to meet with him in person. Maybe when you see his appearance, you’ll only be left with tears.
Me: ……
My friend asked: Are there not any pictures in his Moments?

Going along with what she said, I clicked into Lu’s Moments for the second time. It was like turning on the laughing muscles switch. I found he had turned off the three day viewing setting and allowed me to see even more of his history.

I scrolled down through a few posts. There wasn’t much content and I quickly found last year’s annual meeting. He really was at Guangniu. There was a picture which was probably the department’s group photo. I zoomed in and examined each male in it; they looked like typical engineers. There were also a few younger members whose looks weren’t too bad as well. But I didn’t think any of them was Lu.
What am I thinking, can’t he be one of those average guys?

I studied it for too long, then I exited the page and replied to my friend’s message: The result might really be tears.
The way she laughed made me want to pull her through the screen and give her a beating.

At around nine o’clock in the evening, I took the subway home. When I reached Xilin Lake Station, my eyes were practically glued to the door, paying attention to the onboarding passengers, both male and female.

The car door closed again, I lowered my head, opened up my earbud case, took out the earbuds and put them in. I waited for the noise canceling to kick in and began listening to that song from this morning, Sugar.

I sent Lu a message on the way: I just passed by Xilin Lake.

Up until now, the stop at Xilin Lake had never held much significance to me. But the amazing thing was, once an individual had contact with another individual, their paths would overlap, just like knots on a rope, you made one, I made one.

He replied very quickly: I’m still at work.
I started to flaunt a little: Really? I’m already off of work.

He replied: Can it still be considered early?
I replied: Is the pot calling the kettle black?

He was very agreeable: All right then, I’m very envious.

I laughed freely. In the crowded and chaotic car, I called out: Lu
Him: Hm.
I asked: Did you open your Moments because of me?
He replied: In the past month, I’ve only added one friend.
I leaned back against the chair, and offered an olive branch: I was born in the year of the cat. I hope you can forgive my curiosity.

He probably laughed: Okay. However, when you called me just then, it made me anxious.

He changed the subject: Do you have any songs to listen to on the way home?

I had a lot of songs and even now, a song was currently playing in my ears. But I lied to him: No, I don’t have any more songs to listen to.

Lu shared another song: 《Love in A box》

I clicked into it, a lively prelude sounded from my earbuds, the voice of the male singer was unbelievably fresh with a green leaf kind of feel:

[1] WeChat has a function called Sticky on Top. It is used to pin a chat to the top of your list of chats.
So in here, she’s saying that you either stop talking to them and delete their contact or you pin them to the top so you can continue developing your relationship.

[2] This is similar to how you have a status on Discord. On WeChat, it’s called What’s Up.

[3] Grilled cold noodles is a local specialized snack of the Chinese province of Heilongjiang, cooked by special cold noodles like pieces of paper, with eggs, onions and other auxiliary materials, The main condiment is sweet bean sauce. – from Wikipedia

Hi everyone! Thanks for visiting, I hope you've enjoyed the stories as much I have. Wait for me, I've got more up my sleeve! If you can, please consider supporting me with a coffee or leaving a like or comment! For more awesome reads, join our discord~