A close-up view of the bridge easily appeared in front of them.

It was about ten meters long and spanned on both ends. There were woods on both sides, but behind the woods on the opposite bank, you could see a mountain that was not very tall, and the rest was indiscernible.

Liu Xuan’s breathing picked up pace, and she couldn’t help running over, she found the mask on this old bridge.

She took out the small round mirror she carried with her from her pocket and took a look at her face, seeing the mask covered in patterns as expected.

Originally the mask was completely black, with holes in the facial features, but now it had become colorful, with black showing through only the patterns. 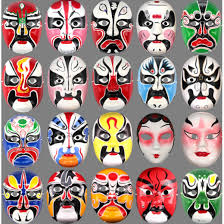 The river was calm, Liu Xuan completely forgot about the two people behind her and ran straight to the ancient bridge, looking for the mask she had discarded.

Ning Meng walked beside Shi Qi and looked at the other side.

“Ho-…how could it be gone…” she muttered, searching the bridge with wide eyes.

After a while, she stood up with a horrified face, looking at the two people who arrived. She licked her lips and said, “The mask is gone…”

Liu Xuan remembered clearly that after joking around with her classmates, she had dropped the mask here. Unless someone had taken it away, it would not have disappeared.

Shi Qi glanced around the bridge deck and said nothing.

Ning Meng looked at the darkness that lingered on her face and comforted: “Maybe it was taken away by the villagers from before, or maybe a child took it from here.”

Liu Xuan could only nod her head.

Standing on the bridge and watching the river was totally different from watching it on the shore. One couldn’t see the end with a glance. The river was calm and occasionally, fallen leaves drifted down.

Liu Xuan had no choice but to give up. Perhaps it was really taken away by the villagers, so it would be better to go back and ask.

It was already past four in the afternoon, and they had spent more than three hours on their way here, adding on to the time they spent at the river, it was really a waste of time.

The area got darker earlier than usual in autumn, so the people in the village were now preparing dinner, one could see smoke upon coming out of the woods.

The people outside also came back, occasionally gathering together.

Looking at this, there were quite a lot of people in the village. There were about dozens of families. There were two or three people in each family, and there are more than 100 people. A village with such a number of people wouldn’t be considered small.

The middle-aged man called Uncle Li took them to see the village chief.

On the way, Liu Xuan pretended to ask casually: “Uncle Li, I was camping by the river last time. Is the river very old?”

Uncle Li nodded: “I’ve seen that river since I was a kid. It seems to have existed very early on. I don’t know how many years it’s been, but we never go there to get water.”

Liu Xuan asked, “Why, it’s not far from the village?”

“Because the river ihas stagnant water, the water can’t be drunk from. We use our own wells for drinking water. Nobody even goes to that river to play.” Uncle Li said indifferently, “Why do you ask this for? I forgot to remind you the last time.”

Liu Xuan didn’t know how to respond, the thoughts in her mind tangling up into a ball.

Ning Meng asked curiously, “Then what about the stone bridge?”

Uncle Li was stunned for a moment. He thought about it and said, “Stone Bridge? It’s also been there for a long time. I’m not sure how long it’s been there. There are beasts on the opposite so we rarely cross it. There was also someone who went over but never came back.”

With that, a regretful expression appeared on his face.

However, Shi Qi seemed to be in deep contemplation, measuring the calm village carefully.

The best house in the village was Uncle Li’s wedding home, as well as the house of the village chief, which were built as cement houses.

The village head was also a middle-aged man, about the same age as Uncle Li, but he was far wiser, “You young people must really like rural tourism, nobody has ever visited our village, it’s always the opposite.”

The ones in the prime of their life left the village, leaving behind the ones that pursued farming.

When Liu Xuan saw that Shi Qi didn’t want to talk, she could only talk to them herself, hoping to get some information.

In the end, she couldn’t help herself and struggled for a moment before asking, “Village chief, have you ever seen a black mask?”

Liu Xuan described it while taking out the drawing from her bag and placing it on the table, “It’s a very ordinary mask, in all black.”

The village chief stared at it for a long time, and spat out a few words: “I’ve never seen it.”

Uncle Li, who was sitting on the side, didn’t look so good, and asked aloud: “Are you here to hunt for treasure? You are not here for tourism?”

In the early years, they heard that some people liked to hunt for treasures, even trespassing into people’s homes at night, plundering and looting, taking all their belongings.

Ning Meng saw Liu Xuan look stunned, and hurriedly intervened: “No, Uncle Li, you have misunderstood. She lost a mask here last time, but she couldn’t find it by the river just now, so she came to ask about it…”

With this explanation, the faces of the two people looked somewhat better.

Ning Meng spread out her hands and replied, “Do you want us to get kicked out by them?”

After persuading them, the village chief and Uncle Li finally had no doubts. The biggest reason was that they were very young and were only high school students.

Uncle Li prepared dinner for them, but Ning Meng and Shi Qi didn’t eat it.

Perhaps it was because they preconceived the village as weird, or because they had encountered the disappearance of the mask on that stone bridge.

Instead, they went to eat in the car which had prepared foods, and they were all what Ning Meng liked to eat. She even saw a bag of melon seeds.

She talked about it a lot at Ningning’s house for a long time, but did not dare buy it, because as a snack, its price was a bit high.

Liu Xuan only assumed that they were going to get some things, so she didn’t follow them.

While Ning Meng ate melon seeds contentedly, she lamented with the system: “I really miss this. When I left, I hadn’t finished eating the ones left on the table.”