Skip to content
Being PAPA’d Every Time I Transmigrate

“Brother Ye, you’ve already seen for yourself how she and Qi Shen were exchanging sweet nothings, she brought this calamity to our Free Manor and caused the death of my father and the many people of the upright sect, she’s the main culprit!”

Once Lu Xueyan had finished her indignant words, the two people who were present did not produce a single reaction, making her feel as though she was a dog who was barking at no one, completely being ignored by the two people.

The her in the past wasn’t like this, she didn’t get this agitated, the aura and bearing of the martial arts alliance head’s daughter nowhere to be found.

Without the free manor to rely on and without her father and the alliance head Lu Yuenpeng , she was no more than a mutt. And precisely because of this, she discarded her self-respect. Even if Ye Hanzhou treated her coldly, she was going to hold onto him tightly.

The structure of the martial arts circle today had been turned into a state of mess all because of the demonic sect’s plan, however, there was one rule that forever never changed.

Ye Hanzhou turned a deaf ear towards Lu Xueyan’s words and coldly cast a glance at her.

Lu Xueyan’s expression froze but she knew that even if she thickened her skin and refused to go, she couldn’t control Ye Hanzhou and would instead, incite his annoyance.

After she left, Ruan Jiaojiao scratched her ears. It had finally become quiet. That woman was really noisy…

Ye Hanzhou also probably shared the same thoughts which was why he carried Ruan Jiaojiao and leapt out from the side window.

When Lu Xueyan noticed something amiss and pushed the doors open abruptly, the room was completely empty, making her heart chill.

Ye Hanzhou brought the woman away and even left her behind. No matter how many things she did for him, going through fire and water for him, she still couldn’t win against the shameless enchantress.

Lu Xueyan stood inside the room in a daze when a cold breeze struck her from behind and immediately, a sword was pressed against her neck.

Her heart had died and turned into dust at this moment. Even if she had fallen into the demonic sect’s hands, she didn’t feel much emotions arise, bitterly laughing.

It was the twelfth lunar month of the severe winter.

At a small town on the frontier of the bitterly cold north.

Ruan Jiaojiao wore a thick mink fur coat, her cap lined with white fox fur, making her face look more petite and exquisite. Her little face was flushed red from the cold and even if she held a hand stove1Hand stove: hand warmer in the ancient times. Picture: 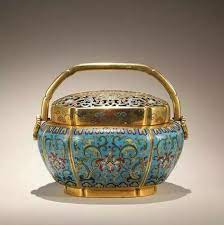 in her arms and was curled on top of the heatable brick bed, she was still shivering from the cold.

That b*stard Ye Hanzhou!! How dare he kidnap her to this god-knows-where!!

The most annoying thing was that the bastard had shackled one of her ankles, connected to a two inch thick nail embedded deeply on a stone wall, simply resolving to keep her confined.

Fortunately, he found a magnificent house for her because even though the world outside was made of ice and snow, even if she managed to free herself from the shackles, she probably wouldn’t be able to walk far before turning into an ice sculpture.

A creak sounded and Ye Hanzhou stepped into the room. When the door opened, the howling wind blew inside, making Ruan Jiaojiao frown. Seeing this, he quickly shut the door tight.

Ye Hanzhou unloaded the prey he carried on his shoulders and immediately walked towards Ruan Jiaojiao.

“You must be hungry. I bought some meat and roasted sweet potatoes from town. Eat them while they’re hot.”

As he said this, he took out the food from his arms. Because of his body temperature, the food was still giving off steam. He took out a pot of wine and poured her some.

She took the greasy roasted lamb and took a bite out of it, then she picked up a sweet and soft sweet potato and bit on it before lifting the cup of wine and taking a sip. Soon, her belly was filled and her body felt relaxed, the cold dispersing.

Ye Hanzhou had already taken off his cloak early on. The room was warm and beautiful and he also had a flower-like beauty. He traveled around the country, dressed in luxurious clothes, enjoying life but didn’t think that in the end, he would be satisfied by such a plain and warm life, even wishing fervently that this would last forever.

Ye Hanzhou pressed Ruan Jiaojiao under him, his fingers skillfully and nimbly undoing her linen jacket, peeling her out of the thick clothes and exposing her fair and beautiful body.

Ruan Jiaojiao laid on the top of the brick bed, bearing the man’s hot body. His stiff and hot desire invaded her slowly but the picture of a youth’s handsome face surfaced in her head.

Seeing her eyes turn misty, Ye Hanzhou knew her mind had wandered and couldn’t help but feel his chest turn stuffy, using more strength. Ruan Jiaojiao moaned, however, her legs were caught by Ye Hanzhou and he parted them even further, pounding the depths of her flower cave even more strongly.

He lowered his head and watched her flat belly. He didn’t care who she was thinking about, he merely hoped that she would be able to bear his child.

Maternal love was probably an innate characteristic every woman had. If she had his child, it didn’t matter who she was thinking about because in the end, she would remain by his side for the sake of that child.

Ye Hanzhou admitted he was a little selfish because he indulged in his warmth. Even if she was poisonous, he was more than willing to drink the poison in hopes of quenching his thirst, and discard everything, only wishing that he could keep her confined by his side.

Ye Hanzhou started thrusting faster, Ruan Jiaojiao’s arms were wrapped around his neck and on the verge of climaxing, she murmured.

He had been lying to himself all this time.

He was like a beast, forcefully tying her to his side. She pretended to go along with him, entangling bodies with him but treated him as if he were someone else.

However, even if he knew the truth, Ye Hanzhou still fell for it.

Ye Hanzhou’s heartache grew with each passing day, struggling to deal with the torment he felt every day.

As expected, the words she previously uttered were all to deceive him, he wished he could kill her with his sword but his heart ached so much…

When Ruan Jiaojiao heard the system tell her that she had successfully achieved her side mission, the points she accumulated growing to 1100, she smirked.

She had accompanied this male lead for so long she had already gotten tired of him. Fortunately, her hard work paid off.

After putting up an act for a long time, Ruan Jiaojiao had truly become brainwashed, feeling an urgent desire for Little Brother Qi Shen so much that she was almost going crazy.

Support "Being PAPA’d Every Time I Transmigrate"

The original of this novel is published at PO18. To support the author, you can follow this guide.