Su Su held the Soul Extinguishing Tear while the divine pearl emitted a soft light in her palm, just like its owner who was about to dissipate.

The demonic creatures stretched their heads out in surprise and wailed.

“Ji Ze is about to disappear, he has long been unable to hold on. Ten thousand years has exhausted him and he’s no longer able to guard the Abyss of Desolation. He could only helplessly watch when demonic creatures escaped. Before he dies, he’s dispersing his soul to strengthen the seal on the Abyss. Just like what he said, this seal can only last for at most three years,” Curved Jade said.

Three years later, without the god’s guardianship, once the Devil God awakens the demonic creatures will break out of the Abyss and plunge the world into chaos.

A white speck of light fell on Su Su’s palm and she was lifted up by a gentle force.

“Ji Ze wants to send you and that child out of the Abyss,” Curved Jade said.

Sure enough, like what Curved Jade said, Su Su watched the scenery of Abyss of Desolation getting farther and farther away and the blue demonic moon gradually dimmed.

Su Su’s eyelashes trembled and she opened her eyes.

As she saw the scene around her, Su Su understood that she’d already left the Abyss of Desolation. A small, cold body lay next to her. It was the child that Su Su had saved from the hands of the snake demon.

The child’s complexion was pale, his hands tightly gripped the hem of his clothes and he still hadn’t woken up yet.

Curved Jade said, “The wind in the crack of the Abyss was too intense. His health isn’t good, so even with Ji Ze’s protection, he’ll still feel unwell.”

Su Su helped him up, only now did she have time to get a look at the child.

He was fair, cute, tender, and his face had an aura of innocence. Su Su examined the child and couldn’t help but say, “He’s even cuter than Tantai Jin when he was a child.”

Curved Jade agreed and chimed in, “I know right.”

When Tantai Jin was a child, his smile looked eerie, and his occasional innocence only appeared when he was killing someone, making one’s hair stand on end.

“He’s still troublesome no matter how cute he is. You can see that his body isn’t well with just a glance, which must’ve been why he was sealed in the weak water coffin. But he accidentally1阴差阳错 (yīnchā-yángcuò) – (idiom) due to an unexpected turn of events/mistake or error due to a strange combination of circumstances fell into the Abyss of Desolation and was unexpectedly awakened,” Curved Jade said. “Now that you have to go and find Tantai Jin, what will you do with him?”

Su Su said, “Let’s bring him out of this frozen mountain first, then see if there’s any family who’ll adopt him.”

Curved Jade examined the child and said, “It’ll be difficult, unless there’s a miracle, with his physique, he won’t survive. He was born weak and only hung on2stayed alive with heavenly treasures. Now that he’s lost his life support, who knows how much longer he’ll live?”

Su Su pinched the child’s little face and said, “Life should be about fighting against the odds.”

If he can grow up through strong winds and rain, in the future he’d be stronger than everyone else. In a world like this, who had an easy life?

Curved Jade felt that the child was somewhat familiar but it couldn’t recall why. Unable to figure it out, it simply stopped thinking about it.

“Little Master, I’m going to hibernate now.” This time, it had been awake for too long, so it needed to hurry and stop the power drain. Even the slightest bit of spiritual energy wasted could mean Su Su would be unable to return to the correct future time.

The Heavenly Mountain was too cold. Su Su hurriedly drew a talisman using her blood and conjured a roc3大鹏鸟 (dàpéngniǎo) – a mythical bird of prey. Image of it: 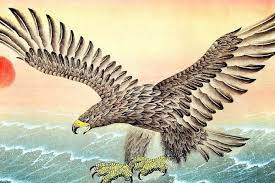 . She placed the child on it then also sat on top.

The roc flew out of the Heavenly Mountain carrying both of them on its back. Su Su’s blood couldn’t sustain it for long, so she had to let the roc land nearby.

She carried the unconscious child on her back and continued to walk forward.

At the foot of the Heavenly Mountain was a winding mountain path. The spring water flowed from the top of the mountain to the base, and the farther she walked, the warmer it got. The forest’s noisily chirping sparrows jumped out to watch them curiously.

Su Su hadn’t been walking for long before she started to sweat. The Heavenly Mountain was so cold, so why is it so hot outside?

It was at this time that the boy woke up. A little squirrel stuck its head out, its mouth stuffed with pine nuts, hiding in the tree and watching them.

His long, thin eyelashes blinked and he realised that someone was carrying him on their back. The girl was softly panting, beads of sweat dripped down her forehead, and her petal-like lips were flushed pink.

He looked at the girl’s profile in a daze.

She used two purple ribbons to tie her hair into two flower bud buns, with purple tassels hanging down on her temples, looking delicate and cute.

Noticing the movements on her back, Su Su smiled and asked, “You’re awake?”

The boy glanced at her, secretly looking at her again, and said in a soft voice, “Yes, thank you for saving me. I’m very heavy, you’ll be very tired like this. Put me down and I can walk by myself.”

Su Su increasingly felt that he was well-behaved and put him down as he requested. “My name is Ye Xi Wu, what’s your name?”

The boy hesitated for a moment then softly said, “My name is Xiao5小 – small/little Shan6山 – mountain.”

This name clearly didn’t sound like a formal name. Looking at Xiao Shan’s restless expression, Su Su didn’t expose him either. It was impossible for a child that could use a weak water ice coffin and wear jade-silk brocade robes to be named something like “Xiao Shan”. She wondered whose golden child had fallen to this state.

As Curved Jade said, in a chaotic world, people that were too delicate would have no chance of survival.

Su Su was so hot that after she put Xiao Shan down, she quickly untied her cloak and threw it away.

Su Su said, “Xiao Shan, you saw it yourself. Your ice coffin melted and I can’t find weak water to recast it for you, so what are you going to do from now on?”

Xiao Shan looked at her, then lowered his head and softly asked, “Can I follow you?”

Su Su was a little surprised. She shook her head and said, “I’ve something to do and it’s very dangerous, so I can’t bring you along.”

He also knew that he was troublesome.

If he was unreasonable, Su Su could still steel her heart, but this child was so well-behaved that she felt a rising sense of guilt.

Fortunately, she understood that now wasn’t the time for her to be impulsive. Even Pian Ran wanted to seek death after falling into the hands of Tantai Jin, let alone such a weak child.

The two walked for a while, when suddenly footsteps were heard from the forest.